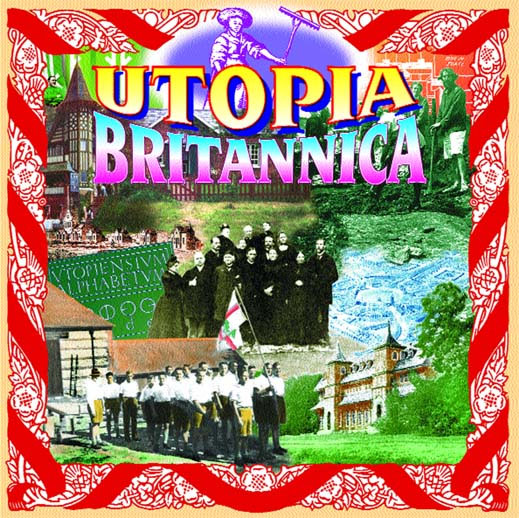 I began writing a history of intentional communities in the UK, what in the 1960s & ‘70s were called communes. As I set off on my journey down communal memory lane with my baggage of preconceptions I thought I was clearly bound for the footnotes of history, but as I travelled through both geography and time. I found myself in places that I never knew existed, accompanied by a cast of characters that ranged from the truely strange & eccentric, right through the corridors of power to the dizzy heights of fame & fortune. What slowly emerged was a Utopian landscape that stretched to the farthest corners of these islands and whose influences are embedded so deep into our national culture as to be virtually invisible. As I have travelled round the country a sort of hidden historic landscape - Utopia Britannica - has revealed itself; a garden village here, a land settlement scheme there, further on a religious community, in the next town a freehold land club, then a Chartist colony, over the next hill a model village, round the next bend a settlement house... .... a landscape peppered with people’s hopes and aspirations for a better world.Taking a long wide-angle view of history, the sheer scale of wave after wave of utopian experiments looks less a catalogue of broken dreams & more like a guidebook for the journey to that other place, a better place - the better place that is no-place - utopia. Now when I travel I move through another country; a country of the imagination dreamt into existence by generations of utopian experimenters who refused to accept that there wasn’t a better place to be than the one that they found themselves in.
The list of utopian characters and their influences& achievements turns out to be as long as it is surprising: including along the way four Prime Ministers, major figures from the world of the Arts & Literature: Coleridge, Shelley, D.H.Lawrence ....all rubbing shoulders with better known utopians like Morris & Ruskin and a myriad of lesser known figures. Their utopian achievements ranging from the heroically idealistic & unrealizable through to the eminently practical with their influences being felt in fields as far ranging as dress reform, religious tolerance, town planning, social work, & the formation of the welfare state.Our debt to Utopian dreamers of the past has gone largely unrecognised and their work often ridiculed, but without them we would live in a different world, as Oscar Wilde said “Progress is the realisation of Utopias.” My own personal journey through Utopia Britannica has been one of travelling in hope of finding signposts to a better world and not being disappointed. I hope your journey is equally rewarding.
Chris Coates. 4.6.2001

Return to top of page